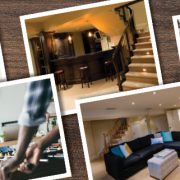 There are many factors that determine if a house has a basement.

It may have to do with the soil the house is built on. Dry soils (like Clay) create problems with expansion and contraction as they absorb water and then dry out. This expansion/contraction puts added pressure on basement walls, causing them to eventually crack and let ground water in.

Some areas have rocky soil and the cost to dig a basement is expensive. In some states like Florida,
Alabama and Louisiana, the soil is too damp to build one (because of swamp lands or wetlands).

In a coastland area, the chances are the soil will be damp too because of a high water table.

The frostline (the depth in which the groundwater in soil is expected to freeze, which depends on the climate conditions in that area) has a lot to do if there is a basement or not. In northern areas the frostline is deep and builders have to dig deep to go below it for the home foundation. Here it makes sense to put in a basement.

Where the frostline is shallow, builders don’t need to go as deep and a crawl space will do.

The cost of building a basement vs. a crawl space is also a factor. It’s much less expensive for a crawl space.

But many home buyers like the extra space a basement provides. It can be used for storage, as a recreation area or as an added living space. If there is a possibility of ground water getting into the basement, an interior water drainage system with a sump pump can be installed.

Existing basements or crawl spaces with moisture problems can be fixed using a combination of an interior water drainage system like ICC Approved QuikFlo, combined with a water diverter like Polydrain and a sump pump (we recommend a Pitboss or Big Boss Sump Pump, or a PumpSpy Battery Backup System for added peace of mind). An Aprilaire Dehumidifier can also be added to remove excess moisture.

If you have any questions about any of these products and would like more information, please contact us at 800.677.7791.

Want To Save $$$$ On Your Shipping Costs?

Why use a Sealed Lead Acid Battery?
Scroll to top